Former WWII Bomber Pilot Gets a Big Surprise for his 96th Birthday. 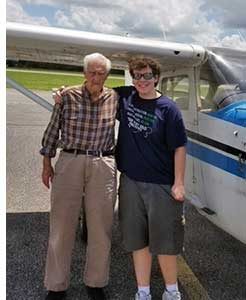 James Player of Milton, Florida, a former World War II B-24 bomber pilot took his first flight in an airplane in over 50 years. His pilot for the flight was his grandson, Zachary Player, a newly minted private pilot who had just passed his checkride on his 17th birthday less than two weeks earlier.

After looking around the cockpit of the Cessna 172 Skyhawk for a few moments, James commented that it was little smaller than he was used to in his B-24, then put on his headset and said “Let’s go.”

His grandson flew a scenic route over the Blackwater River, across Milton and near Whiting Field Naval Air Station, where James got a bird’s eye view of his home and farm.

After the flight, James commented: “today was certainly a different day than I’m use to. I really do miss being up there.” A very special thanks to CFI John Lawler and AMS Flight School for making this truly special flight possible.

We're available right now. But you can send us an email and we'll get back to you, asap.